A Message From PEW

Wells Fargo on Nov. 16 introduced a widely available small-dollar loan to its customers, making it the fourth large bank to offer an affordable alternative to costly payday loans. With this move, financial institutions that operate nearly 13,000 branches—about 18% of all bank branches in the U.S.—now provide automated and near-instant small-dollar loans to their customers.

This change unlocks access to borrowing for many checking account customers with low credit scores who could not otherwise qualify for bank credit. Banks have found that these customers are likely to repay the loans because of their prior relationship with the bank and because the loans are repaid in affordable installments over several months.

The maximum amount of these loans is set at $500 or $1,000, depending on the bank, enabling consumers to borrow as much as they would from a payday lender but at a much lower cost and with strong safeguards. Payday loans usually carry interest rates over 300% and often have unaffordable lump-sum payments that can eat up a large chunk of borrowers’ regular paychecks. In most cases, repeated usage leads to borrowers carrying costly debt for many months.

Although banks use different criteria to determine eligibility for small-dollar loans, the four major ones offering them—Bank of America, Huntington, U.S. Bank, and Wells Fargo—primarily base their qualifications on the customer’s account history with them; for example, whether the potential borrower has been a customer for a given number of months, uses the checking account or debit card regularly, or has direct deposit for paychecks. All 12 million Americans who use payday loans annually have a checking account and an income because those are the two requirements for obtaining a payday loan.

The large banks offering small-dollar loans are charging prices that are at least 15 times lower than average payday lenders. The loans are repayable over three to four months, which is in line with consumers’ views of the time necessary to repay small loans. Compared with typical payday loans, which keep borrowers indebted for five months of the year on average, consumers can save hundreds of dollars using the banks’ loans instead. For example, the average cost to borrow $400 for three months from a payday lender is $360; meanwhile, these banks are charging $24 or less for that credit. Similarly, the average cost to borrow $500 for four months from a payday lender is more than $500 in fees alone while the cost to borrow that through one of these bank programs is, at most, $35. 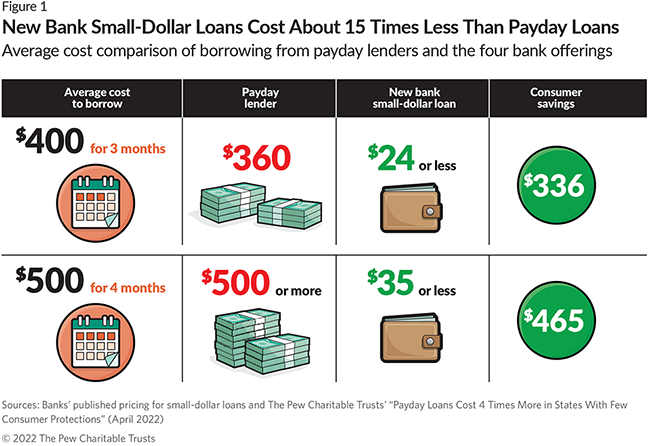 Previous research has found that using payday loans can put customers at increased risk of losing their checking accounts, suggesting that borrowers of banks’ small loans can reap benefits beyond saving hundreds of dollars in fees. And because the average payday loan borrower earns about $30,000 per year—less than $1,200 per biweekly paycheck—the total savings would be consequential.

When Pew surveyed payday loan borrowers, 8 in 10 said they would switch to borrowing from their bank if it began offering small loans and they were likely to be approved. Their top criteria for choosing where to borrow from included how quickly the money would be available, how certain they would be to be approved, and how easy it would be to apply. The banks all have simple, quick online or mobile applications and put the loan proceeds in customers’ accounts within minutes. That’s far faster and easier than the process of any payday lender. This speed and ease suggest robust customer uptake of bank small loans.

Checking account customers who have turned to payday and other high-cost lenders because their banks did not offer small loans now have an option that is far more affordable than any that has been widely available. These new small loans are now an option in part because of thoughtful, well-designed guidance from the Federal Deposit Insurance Corporation (FDIC), Federal Reserve Board of Governors, Office of the Comptroller of the Currency, and National Credit Union Administration that welcomed automation in this type of lending and gave banks the regulatory certainty they needed to develop these products.

So far, only Bank of America, Huntington, U.S. Bank, and Wells Fargo have stepped up to offer safe, small installment loans or lines of credit to their customers who most need it and who would not normally qualify for bank loans. Several other institutions have announced that they are developing new small-loan products. To reach millions of borrowers and help them save billions of dollars annually, compared with what they would owe payday lenders, more banks need to prioritize financial inclusion. To do that, they should join these four in offering similar credit to their customers who most need help.

Alex Horowitz is a principal officer and Linlin Liang is a senior associate with The Pew Charitable Trusts’ consumer finance project.